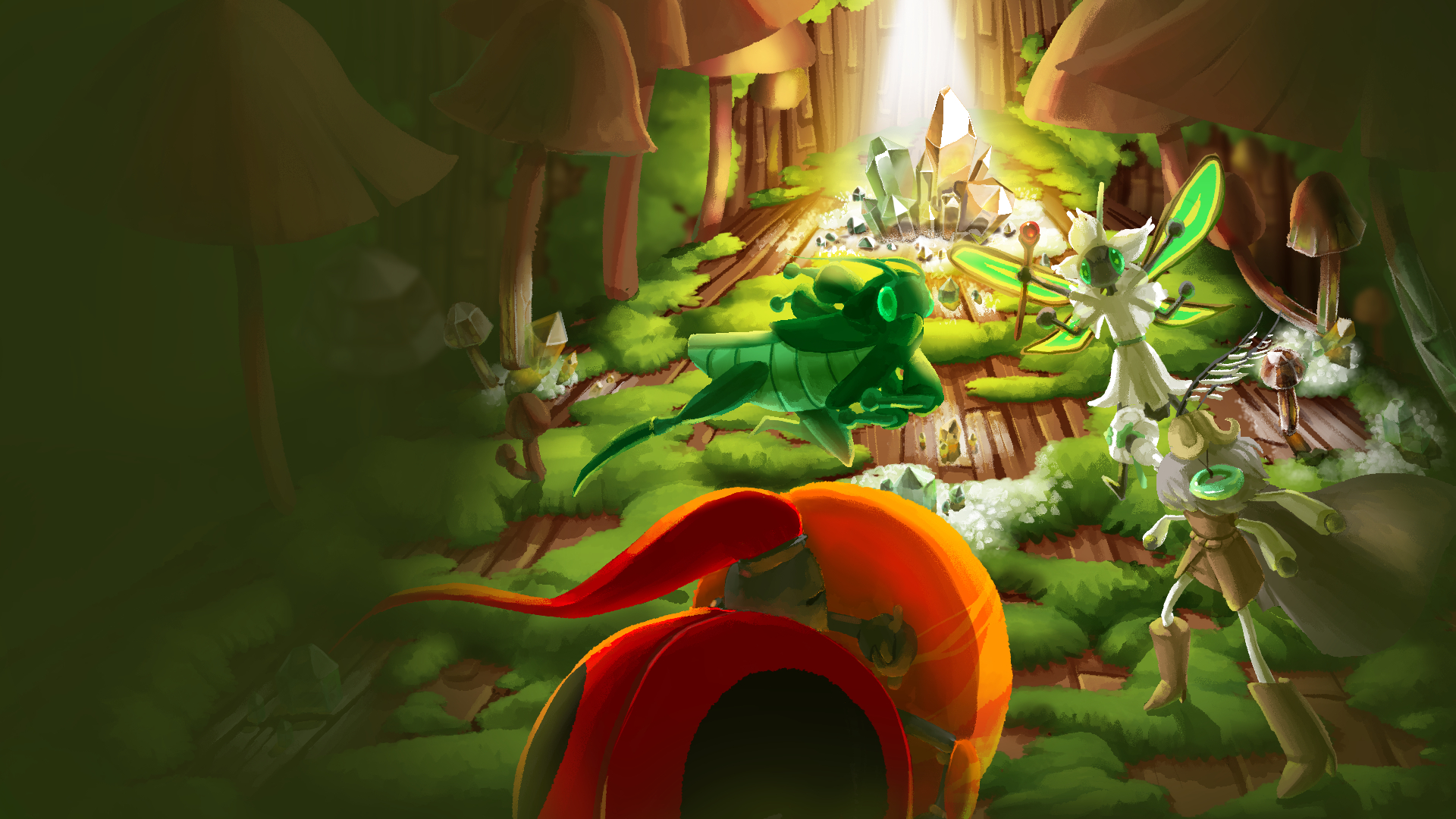 The game is downloadable on the itch.io page of the team.
Game design document disponible ici.

End of second year's project. Buggle Trussle is a party game with a twin stick shooter gameplay. It's made for local multiplayer.
This project was made with Unity, by Pierrick Charbonnier, LastGhazo, Ha-Thanh Gore-Koenig, Loris Hardy, and myself, with a timeframe of two and a half months.

The rest of the team worked on the graphical and sound aspects of the game, in order to get the best looking/sounding possible project. meanwhile, my tasks were : Game Design, Level Design, C# Programming, along with the Project and team management..

The game is currently playable using a controller. Either Xbox 360/One, Dualshock 4, or Switch pro. The mouse+keyboard is currently out, due to being hard to implement for local gameplay and causing problems.

The first idea was really oriented toward casual play. The game had no defined universe, and mixed up multiple concepts, to try and have a weird and crazy looking thing. The idea was to create a simple game, with the fun coming from the strangeness and weird weapons.
This version was quickly discarded. Indeed, the project had no clear direction, and the team had no good idea for having a fun gameplay.

Then, the project got changed a lot. The mix of universes was replaced with a single world, where nature is mixed with magical crystals, and we play as sentient bugs. This helped having a clearer view of the project and where to go next.
In addition to this, the team moved away from the "party game", and instead tried to make a "coopetitive" game. Here, the players had to fight a giant boss together, in order to get treasures. The main difficulty, which was the heart of the game, was the friendly fire. As such, you could kill your "allies", in order to steal their treasures and win the game.

The project followed this idea for a few weeks, with a quite good progression. However, the result was not satisfying, for multiple reasons. The boss was long and hard to animate, for a mediocre result. In addition to this, the gameplay was way less fun than though, with a real difficulty trying to balance cooperation and betrayal, resulting in a bad managing of the phases. Finally, the team itself didn't like the coopetitive mix, and didn't feel it with the starting idea.

Due to all these reasons, we decided to rework the whole concept once again. The cooperation and the bosses were removed, and we got back to the first idea : Four people shooting each other. There was a hard phase of work on balance and fine tuning, but the idea resulted in something fun, but with a better though out context and concept than the first version.

Around the same time, the game was divided between two modes : The classical deathmatch, where the player kill each others to get toward a target score. And a "treasure" mode, inspired by the second prototype, where you had to get crystals on the floor, and death only meant losing a bit of score, that the other players could steal.
This allowed to finally have a valid concept, while not having a lot of rework to do for the code. Indeed, the core gameplay was still moving and shooting. This meant that the final month could be focused on polishing the game.
As such, I managed to add the Universal Render Pipeline to the porject, in order to create new shaders, and have a way to manage 2D lights. This also allowed for better vfx, with more colors or emissive textures.

The gameplay also got a bit more complex. In addition to a starting weapon, the characters go different stats, along with a spell, which means that each character had a unique way to apprehend the game.
Finally, another system got added. This time it's passive objects, that give their wielder temporary bonuses. It's a bit classic, but added another layer of complexity.
We also wanted to differentiate a bit more the two modes. This was made using a positive feedback loop. In deathmatch mode, getting enough kills without dying allows the use of an "ultimate spell". This attack is devastating and takes up a huge part of the screen. It serves as a reward that also have a use to stay on top, and cement the player as the n°1 target. In a bit of the same way, the "bughunt" was added to the treasure mode. By staying alive and in first position for a fixed time, a player would get fully healed, become giant, and get more hp and damages. In exchange, dying meant creating twice has much crystals. This rewarded the leading player, while also changing the game's dynamic, by painting a target on their back, and allowing the other players the chance to get a higher score.

The project then ended, with all the mechanics, and a long work on the artistic aspects.

The feedbacks were very positives. The game was complex, which was kind of a problem, being a bit hard to grasp, with a lot of mechanics.
However, once in game it gets better, and the payers had fun. They start chatting with each other, creating a nice convivial ambiance that we wanted. Most of the people compared the game to Super Smash Brothers, which is overwhelmingly positive, given our objectives.
Malgré tout, la complexité globale rend le jeu un peu difficile d’accès à des joueurs débutants. Il a donc été décidé d’accepter cette complexité, et de considérer la cible comme étant une frange de la population ayant déjà un minimum de connaissances dans le jeu vidéo, et dans le genre du twin stick shooter.